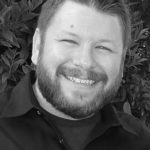 The Board of the Stage Managers Association welcomes to the board, – new recording secretary, Joel Veenstra.

Veenstra replaces the outgoing recording secretary Joshua T. Hardwick who left us to take on new responsibilities in Seattle.  Joshua served the board for a number of years as both West Coast Rep and more recently, as Secretary.  We wish Joshua the best of luck in his endeavors.