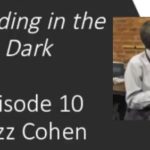 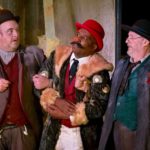 We didn’t start until noon today! Hooray! That’s really because one of my actors had a doctor’s appointment, but it works out well for everyone.

I walked into the kitchen to discover an overabundance of coffee. I guess we won’t have to worry about that for a while.

Our Didi (who had the doctor’s appointment) texted our Gogo to tell him that it looked like he wouldn’t be able to make it in until 1pm because they were very slow (his appointment was at 9:45am). I’m not sure why he didn’t text me, but ok. My ASM ran lines with Gogo, while the AD was getting restless. I started gathering the things we would need to take to the performance space. When we took a break at 1:20pm, Gogo checked his phone and said Didi now doesn’t think he’d get here until 3pm (again, why isn’t he texting me?). ASM continued to run lines with Gogo and the AD worked with Lucky on his speech in one of the smaller studios (Lucky happened to be here working on his lines and was happy to work on the them with the AD). We were able to pick up our original schedule after lunch although Didi didn’t arrive until 3:30pm and he was not happy (because who would be after sitting in a doctor’s appointment for five and half hours).

The president of the board came in to watch for a little while. The AD has an open door policy; anyone could come in to watch rehearsal.

After I sent out the daily for today’s rehearsal (emailed on Saturday), I had received an email from Pozzo saying his conflict was for Tuesday and Thursday, not Monday and Wednesday (the daily said he should get there as soon as he could). I could picture my conflicts calendar in my head and was 99% sure that it said Monday and Wednesday, but I apologized and said I must have written it down wrong. Later, he emailed myself and the AD saying he had gotten the dates wrong: he thought the 27th was Tuesday. While doing the daily for Tuesday, we had to adjust our start and end times a little to accommodate that because the AD wanted to do a stumble thru.

We worked with Didi and Gogo for the first half of the day (doing the things we were supposed to do yesterday). And I found out that one of my dearest friends had a baby!

When we went to lunch, I went on Facebook and found out an actor friend that I had just worked with this past summer passed away. It was definitely a circle of life kind of day.

After lunch we did a stumble thru. That was rough. Particularly for Act 2 (which we didn’t even get to finish because we ran out of time). One of the education actors (my former ASM) asked if she could watch to which the AD said of course. I wanted her to sit by me but the AD said she should sit in the row of chairs closest to the actors so they could get a feel for it. After rehearsal, one of my actors said they should have gotten advanced warning that she was going to be there and it’s totally against Equity rules. First, she asked if she could watch right before we started. Second, the AD pointed her out. Third, I don’t recall any kind of rule like that so I’m going to have to look it up. But really though, I think he was just mad at himself since the stumble didn’t go so well.

This morning I discovered that my friend who passed away had committed suicide. Needless to say, this was a very hard day. I’m having a hard time wrapping my head around it.

We worked large sections of the show with the four adults and Pozzo went for a fitting at the local university (our costume designer works there). We also worked Lucky’s speech.

After rehearsal I went to the grocery store to get food props for us to try on Friday and Saturday.

We started the day working the four adults scene in Act 2 but then the actors asked if they could just run lines for that scene for a bit. While they did that, I was able to gather some things that we’ll need to take to the performance space. Load out of our building is Saturday so I’ve been gathering things little by little. We used to have a pink plastic storage box with stage management supplies but I haven’t seen it, so I thought it didn’t exist anymore (since the move) but my company manager said she’ll look when she gets back from her errands.

Our contact person at the performance space called me to ask how many tables we needed for the dressing rooms and front of house. I was a little surprised because we’ve always brought our own tables in the past but it’s great that we don’t have to this time. Apparently, they are new tables so we have to get some plastic tablecloths to put over them to make sure they don’t get ruined by makeup or anything. She also said that the dressing room we’ll be using is what we would normally use as the ladies dressing room. I guess since we don’t have any ladies in the show this year they decided this would be easier.

My ASM went into one of the other studios to work with Lucky on his speech so I read the Boy’s lines while working his Act 2 scene (we didn’t call him today). Personally, I think it was some of my best work.

We did a lot of scene work today. My ASM was doing line notes for Didi and Gogo so I went into another studio to work with Lucky on his speech.

We added food props today: a turnip (that won’t actually be eaten), a carrot (that needs to have the greens attached – not available in the local regular grocery stores, have to go to Sprouts or Whole Foods or something), 3 pieces of fake chicken (for our vegetarian) and 3 chicken leg bones for Gogo to knaw on (with the chicken cut off).

My ASM brought me lunch today from the restaurant she works at! She’s the best!

The Company Manager texted me that afternoon saying the Boy’s father just called the office and said the Boy had a sore throat and couldn’t talk so he wouldn’t be coming in. I’m not sure why he didn’t contact me but that’s a moot point.

Towards the end of rehearsal, one of the Education Managers texted me asking if I had contacted the education actors who were supposed to be helping with load out and load in to tell them about the time change because no one seemed to know about it. I said no because I didn’t know I was supposed to. The week before at our production meeting we had changed the times. I emailed the three people in charge of the education actors to let them know. One of them emailed me back asking if it was going to change again. There was another part of this email that I didn’t see so I only answered that first part. The second part said if it doesn’t change again, please let the actors know. If I would have seen that part, I would have said I can’t contact them because I don’t have their information. Not to mention the fact that it’s not my job because I’m not in charge of them, that’s why I emailed the other people. The EM who texted me said she would get in touch with them all and will get back to me if there were any conflicts. Luckily there weren’t. Whew.

Right before we left dinner, I saw I had an email from the Boy’s mother. She said he now had a fever so she was going to bring him to the doctor tomorrow. She was worried it could be strep. I called my AD to see what we wanted to do because tomorrow was going to be our designer run. He didn’t text me back until after midnight and said we certainly don’t want anyone getting sick but let’s wait to see what the diagnosis is before determining attendance. I emailed his mother to let him know.

When I woke up, I saw an email from the Boy’s mother (sent at 5 something in the morning) saying he still had a fever and she would keep me posted. I still hadn’t heard from her by 9:45am (we were supposed to start with the Boy at 10) so I called her. They were just leaving the doctor’s office. He didn’t have strep or the flu but he was still contagious. Needless to say, I told her to bring him home to get better.

We had our designer run this morning with my ASM filling in for the Boy and gave notes. It went pretty well, considering we hadn’t run the whole thing before.

We went to lunch and our Lighting Designer/TD started load out. We thought they were going to take the walls we had in the studio after we were done but they were moving so fast we extended lunch by 15 minutes so they could load out of our studio. They were done with the whole load out in less than two hours!

After rehearsal, we had a production meeting while my ASM was packing up the rest of the hospitality things (coffee pot, mugs, etc). I specifically mentioned to my costume designer that she could load in on Monday and someone would be able to help her/direct her to the dressing room area (she had never worked in the space before) since my ASM and I wouldn’t be there (we have off on Sunday and Monday due to load in). After the meeting, my ASM and I packed up our cars – she took the SM and hospitality supplies while I took the props and some other various things (and my own stuff of course). We’ll get to the performance space at 9am on Tuesday (the earliest we can get in) to get ready for rehearsal to start at 10am. There really isn’t a lot for my ASM to do during the show so whatever we don’t finish before we start, she can continue.

Thanks for still reading! See you in tech!