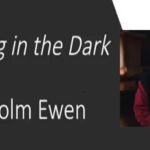 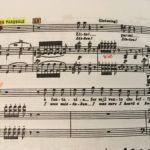 …. (or fly house as the case may be) At least once or twice a season we have unexpected visitors that crash the stage. Who are they might you ask? BATS!

As a theater in an older building with shop doors that are open at least part of the day for construction the cool, dark fly house of the stage must seem like the perfect bat home. Often due to the increased noise and longer period of activity onstage the bats (or bats) make their presence know on the first day of tech.

In one memorable moment a winged visitor dive bombed the stage greatly surprising Dr. Frankenstein while he was singing about the brain. And one patron thought we did a marvelous job with the special effects on opening night of Baskerville because the bat flew over the audience just as the haze and fog were building for the reveal of the hound.

Each year we make sure that we know the location of the bat net. This large wire mesh net, that looks like a fish net, doesn’t really help to catch the critters but it sure makes a lot of folks feel better. Some people say that the bats must be in tribute to Bela Lugosi who performed his legendary role in Dracula on the Playhouse stage in the 1950s.