Mandy Berry – 1st Vice President
Thank you very much for considering me as a chair for the SMA. I am looking forward to continuing the work I have done with this amazing board over the past 3 years. We have established our online document library and are running our education department with our three key programs: Ask a Stage Manager, Collaborative Connections & Operation Observation. The SMA is an asset to stage managers, a wonderful connection to all facets of our industry and we must tap these resources and share with one another to get the most out of our careers. For this coming year I would like to continue with the following goals – creating an audio and video library with interviews of stage managers and useful resources online.

Katrina Herrmann – Recording Secretary
I’m running for the position of Recording Secretary on the Executive Board. Previously I served on the Executive Board as Co-Secretary from 2010-2013. I’ve been a professional stage manager for 14 years and an Equity member for 10 years. Most of my career has been spent in New York and Chicago working on new plays and musicals. The SMA is a valuable resource for the nation’s stage managers, providing practical and tactical support. As I enter the middle of my career, I’m thinking about lifestyle balance, fair wages, and encouraging diversity. The country as whole is at a turning point, and there is work to be done to create an environment in which the arts can flourish. As a Board member, I would focus on building resources that help stage managers not just survive, but thrive.

Bill Hare – Treasurer
This has been a very exciting year with increased membership and growth both financially and geographically. It has been both a pleasure and an honor to serve with this highly committed, activist board. Next year promises to be ever more expansive as we explore additional avenues of growth and further opportunities for service to our fellows. Our ambitions are great while our resources are modest, but I’m convinced that with careful and responsible marshaling, we can take great strides toward realizing our ambitions.

Matthew Aaron Stern – Director-at-Large
I received my AEA card at the La Jolla Playhouse, spent a year as the stage manager for Ballet Iowa and then moved to New York City where I worked on Broadway, National Tours and at Radio City Music Hall. I’ve also stage managed for numerous corporate events and teach stage management at SUNY Purchase. I love stage management and I love stage managers.
I’ve been fortunate in my career and honored to work alongside many great stage managers, from which I have always continued to learn and grow. Membership in the SMA is an important part of my professional life and I am thankful for it. By connecting stage managers to each other, the SMA is vital to our profession and serves a purpose unlike any other organization, as it dedicated to the welfare of stage managers.
We are unique in our profession, balancing everyone else’s needs and being servant leaders. As an organization, the SMA can support us and our needs, providing social outlets, business opportunities and more. I would be honored to serve and help the SMA continue in its mission to support and advocate for stage managers.

Robert Neapolitan – Director at Large
Robert Neapolitan moved to New York in October of 2015. Since then he has immersed himself into the world of Theater. He has been a proud member of SMA for two years. He looks forward to joining the Board of SMA and to help connect, educate and support Stage Managers across the globe.

Anthony O. Bullock – Eastern Region Rep
My name is Anthony O. Bullock and I am proud to be running for the position of Eastern Regional Representative. I have been working along the east coast as an AEA stage manager since 2010. My goal for this position in the SMA is to grow our membership, not just in numbers in areas with little to no members but in active participating members. I hope to continue along with expanding on the benefits and value the SMA provides.

Joel Veenstra – Western Region Rep
I am a professional stage manager, production manager, and improviser based in Southern California. It has been a joy to work with a number of renowned regional theaters and large-scale celebrity galas and to teach stage management, collaborative production, and improvisation at the University of California, Irvine. Currently I have the pleasure of serving as the Recording Secretary of the Stage Managers Association and I look forward to transitioning into the role of Western Regional Representative, pending your vote. Already we have started the process of raising awareness of the benefits of the SMA in the West with two regional events (in Las Vegas on October 27 and in Los Angeles on April 24) and I look to continue to build on these incredible events throughout my term. My network and networking ability will help to support, inspire, and encourage my fellow stage managers in the Western Region. Thank you for your consideration of me for this position. 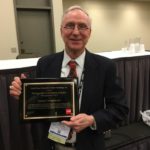 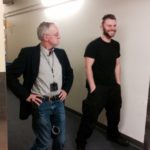 The Board and membership of the SMA are pleased to congratulate Central Region Representative, “Old” Joe (Hash tag) Drummond on being awarded the 2017 USITT Distinguished Achievement Award in Management.  The Award, a lovely plaque, was presented to him by SMA member and Management Commissioner Tina Shackleford at this year’s USITT National Conference and Stage Expo in St. Louis, Missouri.  Joe also received a chocolate cake courtesy of SMA student member Madison Smith, who hails from Capital University.

Joe was a very active participant at USITT this year. He spent a significant amount of time at the Expo in the Stage Managers’ Association booth, at SMA meetings and attended our Social Night Out at Bailey’s Ridge in St. Louis, where a record-breaking 90+ stage managers attended.  He also served as a mentor to a young stage manager throughout the week as a part of the USITT Fellows Early Career Mentoring program.  On Thursday morning, Joe, along with all of the Distinguished Achievement Award winners for 2017, was introduced to the conference and featured in conversation with Board members Kevin Rigdon and Michael Mehler.

Joe recently retired after 42 seasons with the Goodman Theatre in Chicago where he served as ASM, Stage Manager and then Production Stage Manager. He is an institution in Chicago Theatre where he also taught stage management at Roosevelt University for 21 years.  He has been a proud member of Actors’ Equity Association for 45-years.

Joe hung up the stopwatch at the Goodman Theatre with the closing of 2666. This was a production adapted from what the Goodman Theatre artistic director Robert Falls called one of the great novels of the 21st century.  The production, based on a 900-page novel, featured hundreds of characters within the pages of its five parts.  Drummond effectively, and with good humor, helmed this Goodman Theatre Production that required two directors, ran 5 1/2 hours, had three intermissions, a cast of fifteen and a price tag of nearly $1 million.

Previous credits include 133 Goodman productions, among them The Iceman Cometh (also at BAM), Death of a Salesman (also on Broadway in 1999 and at the Ahmanson Theatre in Los Angeles), and Glengarry Glen Ross (Chicago and Broadway), plus 12 productions of A Christmas Carol.  He also shared his skills, teaching at Roosevelt University for 21 years.

A very proactive member of the Chicago theatre community, Joe has, for a number of years served as the regional representative for the national Stage Managers’ Association.  In that capacity, he has organized numerous gathering for the Kick Ass Chicago Stage Managers group. We know him as a resource for newcomers to the Chicago theatre scene and last year, he, along with fellow Chicagoan Barbara Butts, were responsible for a very successful View from the Wings, Chicago that drew stage managers, pros and students, throughout the region, to a sold-out event that was held in conjunction with the SMA and Steppenwolf theatre. He and Butts are in the process of planning their second conference, to be held in the fall of 2017.

Joe received a Chicago Joseph Jefferson Award for Lifetime Achievement after 25 years of stage management at the Goodman.

In December 2011, Drummond received the Del Hughes Award for Lifetime Achievement from the Stage Managers’ Association. 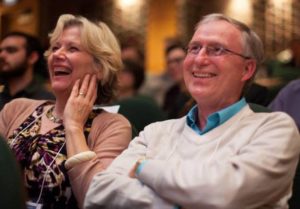 A family man, Joe has always paid great attention to work-life balance (even before it was a buzz word), planning annual family vacations, anniversary trips with his wife and most recently taking on the role as father-in-law with the marriage of his oldest son. (pictured here is Joe and his wife Sarah)

WHAT COLLEAGUES SAY ABOUT JOE:

Robert Falls (Goodman’s Artistic Director since 1986) says, “Joe has been an invaluable asset to the Goodman for many decades. His undeniable talent and unique charm improved the day-to-day lives of our staff and left an indelible mark on the hundreds of artists who had the pleasure of sharing a project with him and the thousands of audience members who witnessed the magic he helped bring to life on stage. Joe defines the term “one of a kind,” and anyone who has worked with him knows exactly what I mean by that.”

Phil Vettel wrote of Drummond in a 1987 Chicago Tribune article about the Goodman’s A Christmas Carol, “… as dress rehearsal begins, Drummond is the busiest man on stage even though his feet rarely move.”

Joe is truly an artist.  His commitment to the art of stage managing was evident when he was doing Cyrano with director, Michael Maggio.  In that production, there was a very complicated fight scene.  Michael enjoyed Joe’s cue-calling on that particular bit so much that he delighted in being on headset just to hear him call it.

As for Joe, he’s “grateful to Roche Schulfer and Bob Falls for the opportunity to hone my stage management skills along side so many talented staff members and artists.”

In an article about Stage Managers published by Backstage magazine in 2001 Joe opines, “You have to want to do this because you just plain want to.  Your satisfaction comes from seeing the production turn out well.”

Drummond observes, “When I became involved with the theatre professionally in the ’60s, I didn’t even know there was such a thing as a stage manager who was responsible for the running of a show. I don’t think stage managers were even mentioned during the two years I spent in acting school.  Now many university theatre departments offer majors in this area.”

His very best advice to stage managers?   “Always carry a fork; you never know when you might encounter a chocolate cake.”